Tourist season: all year round except winter

Western Kazakhstan is quickly becoming known all over the world for its unique unearthly landscapes, incredible historical monuments of the Middle Ages and amazing mysteries of nature. During this tour, you will visit the following places:

"Zhygylgan", translated from Kazakh means "fallen down". It looks as if the earth has fallen in this place. At the entrance, an almost flat and seemingly endless steppe suddenly ends with a steep precipice of more than 3 km. The height of the sheer wall in places reaches a height of 50 m. At the base of this wall, there is unimaginable stone chaos.

In stone gorges were found deep caves, where various tribes hid from enemies in ancient times. Here were found several ruins of fortresses and a lot of rock paintings.

Zhygylgan remains a place far from being known and mysterious. They say that spirits live here. It's hard to convey all the power and beauty of Zhygylgan in the photos, you need to see it with your own eyes.

Underground mosque of the protector of sailors holy Sultan Epe - a monument of religious architecture.

The mosque was built around the IX-XII centuries. The mosque consists of 11 rooms. It is so narrow here that in some places you have to crawl to get from one room to another. According to the architecture, the ventilation system and lighting, the building was erected according to the advanced model of its time.

Kapamsai is a narrow chalky canyon that strikes with its steep and even walls, reaching a height of 70 meters. Weathered canyon niches are secluded refuges for eagle nests, whose owners often hover over the canyon abyss. In quiet calm weather in the canyon, "echoes" strayed in the steep walls. You can get into the canyon only from the mouth. But the top view of the canyon is very impressive. In the depths of the canyon lurks another rare sight for these places - a huge grotto, in the heart of which rainwater washed the hole. The water accumulating under the arch feeds a small grove of mulberry and hawthorn trees. Even on hot days, there is always shade and coolness.

According to archaeologists, a narrow and deep river flowed at the foot of the chalk cliffs of the canyon. In addition, there were workshops for the production of silicon tools. Today, the Kapamsay canyon is admired by travelers from different parts of the world.

The underground mosque Shakpak-Ata, which, according to archaeologists, dates from the 9th and 10th centuries - a unique place worthy of world attention, one of the most impressive monuments of Mangystau. Nature herself created this temple and the stonecutters who came here only adapted it for their own purposes, giving a complete look. There are no shapes honed to full symmetry and geometric perfection. Everything is done simply and naturally. This is the special enchanting beauty of the Shakpak Ata Mosque.

The plain stretches for many kilometers, and then suddenly - stone balls, some up to three meters in diameter, like peas, scattered along the valley. Where did they fall from or who rolled these stone balls to Mangystau peninsula?

The valley of balls in the tract Torysh is a unique and one of the most mysterious sights of Mangystau, attracting tourists from all over the world. For 250 years, scientists have been puzzling over the solution of balls of different sizes and colors, consisting of sedimentary rocks - sand and clay, but they have not come to common opinion how they were formed.

The huge mysterious mountain Sherkala is a lonely standing mountain of unusual shape, located about 170 kilometers from the city of Aktau, not far from the village of Shetpe. This is large sediment of unusual shapes that arose during the formation of the mountainous Kara-Tau valleys as the result of raising the land from the sea depths.

If you look at it from one side, the mountain resembles a huge white yurt, but on the other - Sherkala resembles a sleeping lion, who laid his huge head on his paws. Therefore, they called the mountain - Sherkala, which in Turkmen means “Lion's Mountain”.

The Airakty-Shomanai Mountains also called the Valley of Castles, is a fantastic creation of nature. In the ancient ocean of Tethys above Ustyurt, fantastic mollusks once lived. Of their remains were formed amazingly beautiful mountains. A tectonic movement formed the landscape. When the water was gone, the wind, like a jeweler, for thousands of years, carved out incredible works of art from rocks and spurs. For those who love to travel, there is something to see. In the Valley of Castles, you will find many towers, fortresses and other amazing forms. You will not get tired to enjoy these species even all day.

In the spring, in the valley among the Airakty-Shomanai mountains grow Sogdian tulips. If you are lucky, you can see in the Valley of Castles a couple of cautious mouflons - mountain sheep. But you will surely meet camels. They often graze peacefully nearby, completely paying no attention to visitors.

Climbing to the top of the mountains, you can admire not only the amazing panorama of the Mangystau landscape and the neighboring mountains but also the works of modern artists. Not so long ago, the Mangystau archaeologist Andrei Astafyev created his gallery of geoglyphs in this mountain valley. Giant geoglyphs unwittingly rivet attention and amaze with their greatness. They became the decoration of the Valley of castles, giving it a unique Turkic feature.

Videos about these places 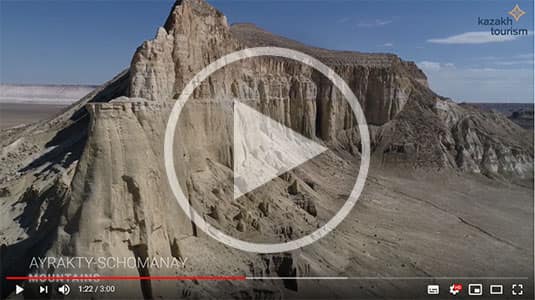 Tour area on the map

PHOTOS OF OUR TOURISTS REVIEWS OF OUR TOURISTS

✔️ Entrance fees and all taxes

Please fill in and submit the form below or contact us through any available contact method indicating the date, name of the tour and option (GROUP or PRIVATE).

We accept online payments via PayPal payment system. After receiving the invoice from us through PayPal, a 10% prepayment is required as confirmation of the booking on your part. PayPal is a safe and fast payment way without fees. Debit/credit cards are accepted. Full payment (in cash or via PayPal) is required on the day of the tour.